From the Mother of a Marine 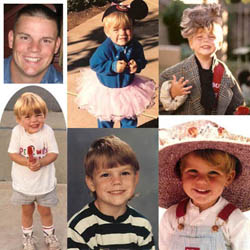 r of a Marine, but first I was the mother of a beautiful little blond boy who used to sit for hours “fuzzing” his blanket and watching “Lady and the Tramp.” (Yes, sometimes I did use TV as a babysitter.) As third children often are, he was the comedian of the family and the darling (aka spoiled rotten). Typical boy, in and on everything, never clean, who could play any sport with a ball in its name at 2. He ate his crib (literally), and discovered that sometimes if he was very lucky he could reach into his diaper and find he had magically manufactured finger paints. Hopefully you owned Clorox stock in the 80’s as I’m sure he single-handedly raised the company’s net worth.

Although definitely more relaxed in my parenting by the time he came into being, he was my baby boy and I felt if he didn’t see any violence, he would be a mellow (hey I was from California) peaceful little creature like his sisters. The family thought I was crazy as I maintained my ban of all “violent” cartoons (Bugs Bunny, Road Runner, Scooby Doo), nor would I buy him so much as a squirt gun. Imagine my surprise when he started pointing his chubby little fingers and shouting “bang bang” with glee at every target real or imagined. At 3, it was sticks from the backyard and at 4, he would pull the couch cushions down to create a bunker and lay in wait to ambush his sisters with whatever make-believe gun that was the flavor the day — a block, a spoon, a hairbrush. He mastered machine gun sounds using paper towel tubes which were his weapon of choice. At 5, everything was dinosaurs and camo. We had a brief intermission when he became obsessed with a little girl from his 1st grade class. At his School’s Open House, while the other mothers and fathers were proudly commenting on their son’s and daughter’s drawings of firemen and veterinarians, the teacher excitedly led us to Cameron’s version of “What I Want to be When I Grow Up”. My husband and I stood there trying to figure out what the picture meant, as the teacher stood there trying not to giggle. All we saw was a flatbed truck with 3 turquoise boxes parked side by side. Apparently his crush’s daddy owned Chuck’s Sanitation, the largest porta-potty company in town, and Cam had decided how to win the girl’s heart — become a porta-potty driver. We were so proud. 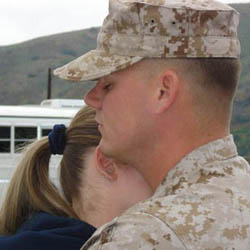 After years of feeling like Sisyphus, I realized my folly. Deciding to celebrate my wild and wooly boy-child, I stopped the useless ban and finally Teenage Mutant Ninja Turtles sheets, t-shirts and jammies appeared in our home… and eventually even the movie. At 10, Cameron and his buddies geared up with flashlights, water bottles, peanut butter sandwiches, E L Fudge cookies and whole bags of Doritos for their long night in the woods (our backyard). My husband took up duck hunting and once our son had passed hunter safety, he was invited to go with dad and dog to freeze in the blind. By 12, I can say that I had officially and completely caved. Cameron received a Red Ryder BB gun from his grandpa but by then “A Christmas Story” had become one of our favorite family classics so he was well aware of the danger of sticking his wet tongue to a lamp post in winter and could repeat Ralphie’s mother’s familiar warning “You’ll shoot your eye out” in perfect pitch and intonation.

At 15, his father and I divorced and it was especially hard on him. He had to learn to live with me, and I him. Our snicker bar fights saved us. Instead of pulling couch cushions down to make a bunker, we used the kitchen counter, he on one side and me on the other, and up and down we would pop like yo-yos as we tried to bean each other with the now bedraggled sugary snacks. I know, I know, where had my parenting gone? The reality is that we need to “play” through the hurt and play we did.

And 4 years later when I married a former Marine, Cameron found the courage to realize his destiny. It was as if all the cogs fell into place, and we made the connections and understood he had been training for this his entire life. Doritos were his first MRE, the couch cushions his first bunker, but he was going to be shooting more than a BB gun this time. So we worried.

This baby boy who got his first girl’s phone number at 2, who tricycled around the pre-school parking lot in his big green dinosaur costume, who escaped the house wearing nothing but a diaper to chase the garbage truck and made it almost a block before he was retrieved, who created “fountains” like his daddy using mud, sticks and a hose, who must have watched Lady and the Tramp 300 times, this baby boy would one day become a Marine. Proudly serving as a US Marine, he would be deployed 3 times, be injured by an IED, be medevaced out of Afghanistan, and be returned to his high school sweetheart who is now his bride. He is mostly fine and although his laugh is a bit harder to find, I truly believe if I picked up a snickers bar he would know what to do with it (I would be wearing it on my forehead).

I am also grateful for the Wounded Warrior Project of which Cameron was a part. Thank you for taking care of my son when I couldn’t.

This site uses Akismet to reduce spam. Learn how your comment data is processed.